Life In A Paradise – Highlights Of Maldives

Since I was a little girl I’ve had this weird obsession with Maldives. I have no idea where it stems from, but only thing I knew is that I need to go there. That’s literally the only reason I chose Maldives to be my first “long distance” destination.

I flew out to Maldives from Frankfurt after spending couple of fun and eventful days there. Arrival to Maldives was not as smooth as I planned. My bank declined both of my cards, and I was at the airport with no money, Wi-Fi or anything. On top of that the ferry I was supposed to take to my final destination got cancelled. But as soon as I walked outside the airport and saw the colour of the ocean I literally couldn’t care less! I’ve never seen anything as beautiful as the bright ocean in Maldives. So bright, turquoise and glittering!

Thankfully I could contact my host from the airport info, and soon he sent a friend with money to pick me up. They helped me to get the ferry, taxi and so on to my “emergency” apartment for one night in Malé. Malé is the capital of Maldives, and it is such a funny island packed with tall buildings and chaotic streets full of scooters.

After spending the night in Malé I had to take an airplane to my final destination, because the ferry connection did not run that day. But as soon as the plane took off, I knew I wouldn’t regret it! The views were so breathtaking, and even the pictures can’t show the beauty of what I saw. The atolls from the above are truly something magical.

I spent most of my time in South Ari Atoll in a charming local island called Maamigili, which was kind of my “headquarters”. From there I made a lot of short trips to different island and resorts. My time in Maldives was all about experiencing gorgeous beaches and resorts, diving and working on some mindfulness and calming down. If you don’t know already,  I do scuba diving, and the highlight of my trip was definitely the days spent diving. I feel like the ocean is my second home, and this trip was all about diving and spending time underwater.

I can still remember the first dive I did in Maldives. As soon as I put my mask underwater, I couldn’t believe my eyes. There was a huuuge whale shark just chilling there, right blow me! That was such a magical moment, and we ended up seeing two more whale sharks on that dive. The water and corals in Maldives are so bright, one of the most beautiful place I’ve ever dived in my life. After seeing a few resorts and local islands, I could already say that I liked the local villages so much more than the resorts. I got so bored in the resorts, there was not that much to do to be honest. Only good thing was that they had gyms there haha! After my wonderful time in Maamigili, I wanted to see another atoll, so I headed north. I stayed in a local island called Ukulhas, which is part of Alif Alif Atoll. Ukulhas is known of its gorgeous beach and that was most definitely true! You definitely don’t need a resort to enjoy the breathtaking postcard beaches of Maldives. 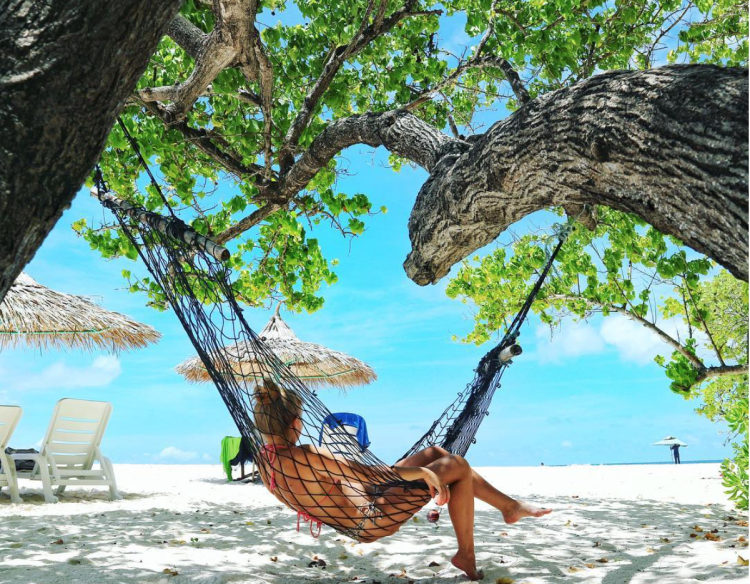 Ukulhas was also super cool because they actually had a local gym there! The name of the gym is Bodyworks, and it is such a charming iron gym with Arnold Schwarzenegger posters all over the walls haha! I was super excited to spot the squat rack and bench in the gym, since I had not seen a barbell in a hot minute! I had only been training in the resort gyms and well, the resort gyms are just like you expect the resort gyms to be like. Lots of cardio machines and hardly any free weights.

My time at Maldives was overall so so relaxing, just what I needed to kickstart my travels around the world. Though after more than three weeks in Maldives I missed a little action, and as I stepped onto the plane heading to Bali, I could just wonder what kind of adventures I would face in my time around Indonesia!

There was an error retrieving images from Instagram. An attempt will be remade in a few minutes.